In the second half hour, an unexpected twist took place in the quest by Slats Grobnik for a Second American Revolution.
In the 1st half hour, Greg looks at the absurdity Covert 19. The speed and scale at which this engineered crash has shut down an entire planet is unprecedented, and awesome in its horror. This conquest was achieved in the span of mere days. With no resistance. Every corner of the globe, every individual, imprisoned mentally as well as physically. All it took was one Big Lie, one Big Fear. 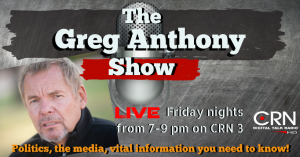